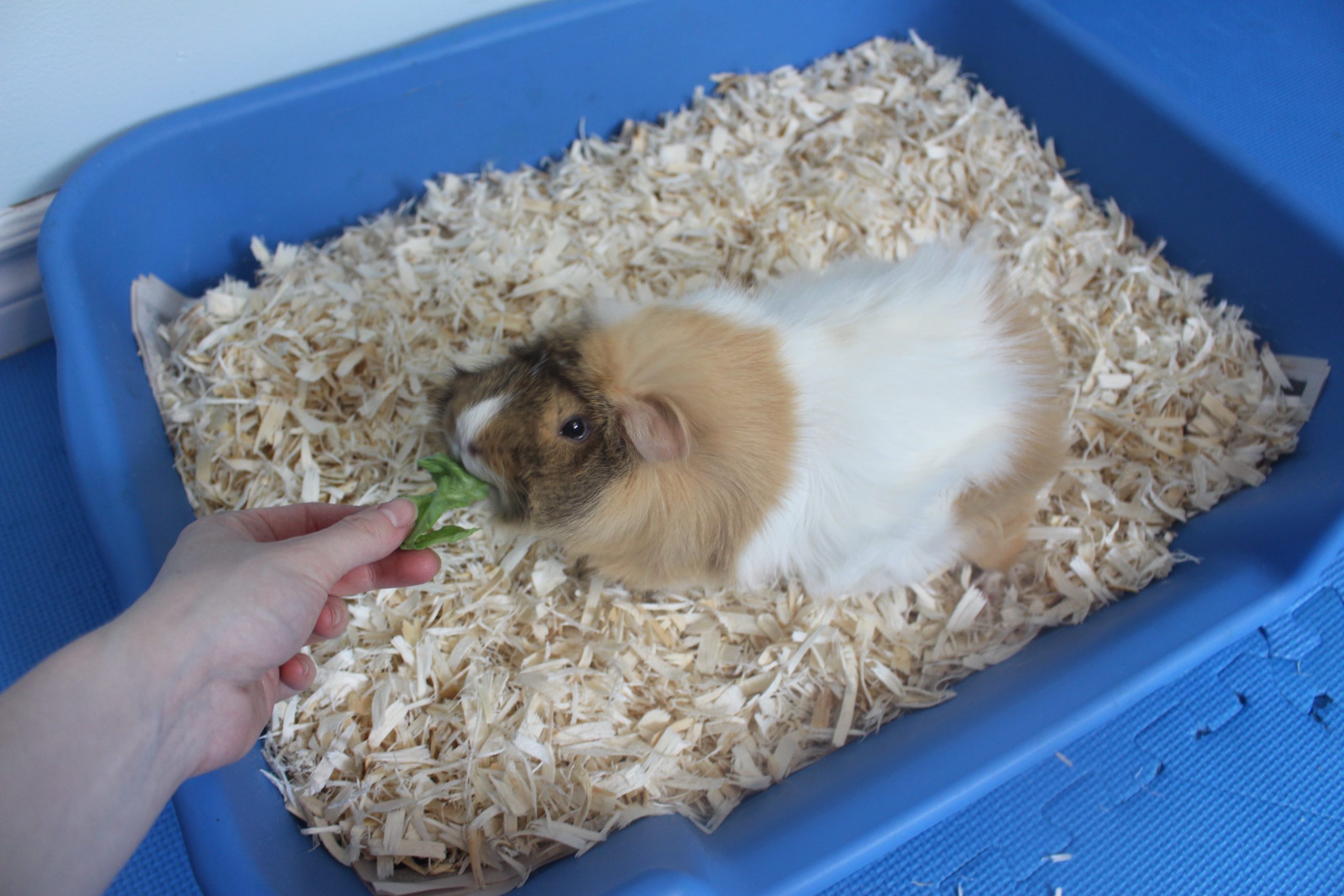 It’s no secret that guinea pigs poop. A lot. And often everywhere. Litter training guinea pigs can have significant benefits. Not only does it result in a cleaner cage for the guinea pigs, but it also requires less cleaning and less money spent on bedding.

Litter-trained guinea pigs still probably won’t be 100% accurate in their litter habits, but they can significantly improve from using the whole cage as their litter box.

Most of the litter “training” with guinea pigs is less actual training and more of a management technique of strategically placing the litter box in certain places and making it more comfortable for the guinea pig to encourage them to use it. Nonetheless, it keeps the cage neater and reduces any potential smell in the cage.

I like to group guinea pigs into two types; the ones that tend to do their business in certain spots (they may have 2-3 areas or corners they use the most) and those that…. just kind of let it fly wherever they are.

I have some guinea pigs that fit into each category, and they have all improved significantly with their litter habits. So even if you have a guinea pig that goes by the rule, “The world is my litter box!” there is still hope!

If you have a guinea pig that does appear to have favorite spots to go, it’s a good idea to start by putting paper on the floor where all of their favorite litter spots are. You can then gradually take one litter area away until you are down to just one litter corner. After that, you can try switching the paper out to a box.

Choose the right size litter box for your guinea pig

When choosing the correct litter box, you’ll want to consider your guinea pig and the size of your cage. Unfortunately, many guinea pig-sized litter boxes are too small. Usually, they are barely large enough for the guinea pig to sit in, with no extra room to put hay.

I can tell you from experience that even the guinea pigs that use these will step into them with their bum hanging over the edge and proceed to pee just outside the box.

So when choosing a litter box for your guinea pig, you’ll want to look at rabbit or ferret boxes. Some cat boxes may work, but you’ll need to find one with shallow sides or make a cutout on one side for easier access.

Corner litter boxes for rabbits are ideal, as well as the Marshall’s high back ferret box. I’ve used both styles, and they work well for guinea pigs. There’s enough room for the guinea pig to get in and turn around comfortably, and you can also fit a small pile of hay in them.

If you are very limited for space in your cage or if you have an older guinea pig, some newspaper or bedding in a corner may work instead of a box. However, this is often messier and requires more frequent cleaning.

Pick their favorite litter corner for the paper if you can, and put their food and hay in the same corner.

Recently I’ve switched all my guinea pigs over to Puppy Go Here litter pans. These are made for litter training small dogs and puppies, but they also work perfectly for guinea pigs and rabbits!

These pans are not going to work if your cage is on the small side. However, if you have a c&c or similar cage type, these litter boxes are absolutely worth it.

They have low sides, a shallow cut out for guinea pigs to get in, and have tons of space to put hay and food. Guinea pigs often poop and pee where they eat, so putting all their food in a litter box is very effective.

​I also used to have trouble with hay getting absolutely everywhere in the past, and these litter boxes do a great job of keeping the hay much more contained. I also hang the piggies’ water bottles over the litter box to catch the extra drips.

I have one guinea pig, in particular, that would soak his bedding with water because of the way he likes to drink from the bottle. Cleaning got so much easier when all the water just dripped into the litter box instead.

I have 3 of these litter boxes (in 3 different cages) now, and they’ve cut my cleaning time by 80%. Totally recommend it if you have the space in your cage!

Choose a different material for the litter box

The material used in the guinea pig’s litter areas should be different than the rest of the floor so the guinea pig can easily differentiate between the two.

I prefer to use something soft like fleece on the cage floor and a bedding material such as aspen shavings or recycled paper pellets for the litter areas. Paper-based bedding is another excellent option.

Place the litter box in a quiet, private place

Guinea pigs like their litter areas to be in a comfortable and secure place. Putting the litter box in a private space or draping a blanket or towel over their box usually does the trick. If your cage has a “second floor” like a C&C cage with a ramp leading up to another area, the space directly under the second floor would be an excellent place for a litter box.

You can also zip tie a couple of wire grids over the litter box and drape a blanket over the top to create a little canopy like in the photo below on the right. Simply adding this canopy improved the amount my piggies used their litter box significantly!

Teach the guinea pig to jump into their litter box

When first introducing a litter box to your guinea pig, it is a good idea to teach them how to jump into the box. Lure them into the litter box and reward them when they jump in.

Practice several times and continue to offer treats for staying in the box as well. Try to make their litter box a positive and rewarding place to be.

Put hay, food & water in or near the litter area

Guinea pigs usually poop in the places they spend the most time. And guinea pigs spend a lot of time eating! It’s no secret that guinea pigs often poop wherever they eat.

Putting a pile of hay in the litter box (or a hay rack beside it if the box is too small) is a good way to keep the guinea pig coming back to their litter box and staying there while they graze on the hay.

If you have a large enough litter box with low sides, you can also fit their food bowl and water bottle in the litter box as well. I found that moving these three things to the litter box helped keep cages a lot cleaner.

Put any accidents from the floor into the litter box

Try to put any stray droppings in the litter box so that the box is the only place with soiled bedding. This can be hard to keep up with sometimes, but it should become easier as the guinea pig uses their litter box more and more.

You can do this by placing the box near their food or incorporating the litter area into their favorite hiding places.

If your guinea pig already has a preferred area of the cage to do their business, these areas would be ideal placements for a litter box.

Putting big piles of hay in the litter box is also quite effective at keeping guinea pigs in their box, as they eat hay constantly throughout the day.

Use Washable Pads and Mats in Sleeping Areas

When not using their litter box, many guinea pigs will eliminate in their hidey houses or sleeping areas. You can make cleanup for this a lot easier by placing washable absorbent pads or chenille bath mats under hidey houses and sleeping areas. This makes daily spot cleaning a lot faster, as all you need to do is swap out pads and shake them into the garbage.

It’s a good idea to change the bedding in your guinea pig’s litter box frequently, so they have no reason to start avoiding it. How often it needs to be cleaned depends on how many guinea pigs you have and the number of litter areas you have.

If you have a small box that gets soiled quickly, you may want to clean it every day. A large litter box with a thicker layer of bedding is usually good for a week or so.

If your piggies like to sleep in their litter boxes or sit in them for extended periods of time, you may want to add an extra layer of bedding or change it more often, so it stays dry for them.

I like to add a big pile of hay to the box once a day, so there’s always some fresh hay over the top of the regular bedding.

Using multiple litter areas for your guinea pigs, particularly at first, helps keep the mess contained and gets the guinea pig used to using only their litter corners.

Good places to put litter boxes include corners of the cage, anywhere with food or hay, in their hiding places, or any other places they frequently visit or hang out around.

If your guinea pig has already chosen a few places they like to use for their litter area, be sure to put a litter box in those spots as well.

Guinea pigs can be messy and hard to keep up with sometimes. But litter boxes can help a lot, as long as they’re placed strategically in the cage. With a little bit of patience and consistency, litter training can be very effective and save a ton of time on cleaning.

If you found this article helpful, be sure to check out our guinea pig care page, which has tips on saving money with guinea pigs, enrichment ideas, floor time tricks, and so much more.